And it’s not just actually having one that causes problems, merely suggesting it means stepping into precarious territory. Here’s how to minimise the fall out.

It depends a lot on what combination you’re wanting and when you’re asking if you’re trying to calculate the risk.

Generally, the more committed the person and the longer you’ve been with them, the more offended they might be.

It’s a natural instinct to not want to share. Which is why, if you’re really into threesomes and want them as part of your regular sex life, you need to establish quite early on what your partner’s views are. It’s easy to find out, simply talk about a friend who’s really into them and see what their reaction is.

They’ll either screw up their noses up and go ‘Ewwww. I so don’t get threesomes’… or look intrigued.

Keen to take it further? Here’s my advice on how to go about it:

Always, always ask ‘What do you think about threesomes?

Even if they react favourably to threesomes as a concept, don’t be surprised if they still get horribly offended at you suggesting one. Lots of people think threesomes are fine for couples who aren’t in love but can’t imagine sharing once they are. Since you can, their first reaction is to doubt that you ‘truly’ love them. Play it very much from the ‘I’m just intrigued by it and wondered what you thought’ angle rather than ‘I’ve already lined her/him up and they’re coming over tomorrow night’.

What if your partner wants one and you don’t?

Try not to have the kneejerk reaction of thinking they’re bored with you sexually. It doesn’t necessarily mean that, though it does mean they want hotter sex. By all means say no (and to be honest, I’ve seen threesomes ruin rather than enhance lots of relationships so think long and hard before agreeing) but suggest something else instead.

Perhaps go to a lapdance or strip club and have a full-on flirt while your partner watches? Or consider having phone sex with a sex worker on loud speaker. The main thing is to simply suggest something else daring that you are willing to try. 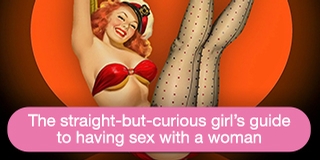 • Instant Sex Fix 3: How Can We Have A 69er That's Satisfying? Previous