About to sleep with someone for the very first time? Here’s what they’re thinking as you strip off

About to sleep with someone for the very first time? Here’s what they’re thinking as you strip offTracey3rd March 201822nd January 2021 Whether it’s a Tinder hook-up or a long-awaited first night with a potential love of your life, getting naked for the first time can be nerve wracking!

You won’t be the first person to wonder what your new lover is thinking the first time they see you stripped bare.

My bet is any – and probably all – of the following.

You think they’re judging you? Wrong!

Gay, lesbian, straight, gender-fluid – we’re all far too caught up in worrying about ourselves…

I’m about to have sex!

If a naked woman is standing in front of you it means sex is an absolute sure thing, so his first reaction is to feel very happy. This is quickly taken over by a not so pleasant thought…

Is my penis big enough?

Unlike women, all his bits are out there and on display immediately. Which is why he’s frantically searching your face in an attempt to read any minute micro-expression that hints he’s not living up to expectations. If he thinks he’s passed this test, his next thought is another panicky one…

What if I can’t get an erection?

Women can fake desire, men can’t. The first time you have sex is unbearably exciting but the pressure is on… him.

He’s looking at your breasts

After all that’s been filtered and processed he can finally pay attention to what’s in front of him.

Time for the ‘bra on vs bra off’ test. You looked great in that cleavage-boosting Victoria Secrets push-up but do they stand up to scrutiny without the scaffolding?

He’s seeing what you’ve done down there

This is a precarious moment because whether you’ve waxed, trimmed, kept a ‘landing pad’ or whipped the whole lot off, you can’t please all the people all of the time.

Some men love no hair because all is revealed, others look and instantly think of a plucked turkey.

He’s watching to see how body confident you are

If one arm flies up to hide your breasts and the other heads south to cover down below, he knows he’s in for some pretty standard sex. Stand tall and let yourself be admired and he knows it’s going to be fabulous.

WHAT HE’S NOT NOTICING:

Your weight. Unlike breasts, body size can’t really be camouflaged. By the time you’re both naked, he’s already got a pretty good idea of what he’ll see.

Besides, he’s far more interested in looking at the naughty bits to notice whether your thighs wobble when you walk.

She’s checking out your body generally

Women are just as lookist as men are – studies tracking eye movement show women give men the once over physically just as much as men do women.

It doesn’t mean we’ll dump you if you’re not sporting a six-pack but don’t kid yourself we’re immune to what shape you’re in. Same goes for lesbians: women are a lot more forgiving of other people’s body flaws (sadly, not so with our own) but a body that’s been looked after always trumps one that isn’t.

She’s comparing to see who wins the body beautiful competition

But if you’re in much better shape than we are, our body image issues are kicking in big time.

Ohmigod I should never had had those crisps earlier. His legs are more shapely than mine are! Look at that bottom! How come men’s bums don’t droop like women’s do?

She’s checking out how big you are

But it’s the opposite to what you think: if you’re over size, this works against you!

It’s not true that women love men with big penises: it often makes sex uncomfortable, even painful. So if you’re average size, feel reassured. Even if you’re undersized, don’t panic. So long as you’re good with your tongue, it won’t matter.

She’s looking to see if you have an erection

If you haven’t, the first thing we’ll think is that it’s our fault. Instantly reassure her it doesn’t mean you don’t fancy her now you’ve seen her starkers or you’ll both end up deflated.

Most of the time, no erection on a first night of sleeping together is a compliment: it means he’s super nervous and desperate to impress.

She’s watching your reaction to her nakedness

This, quite frankly, is concerning us more than anything else. The correct response is your eyes lustfully travelling over our body and a "You’re good enough to eat" expression on your face.

WHAT SHE’S NOT NOTICING:

Not much! Women are better at taking in detail than men.

We’re more likely to notice that mole on your back, tan line, what brand underwear you just peeled off, your feet, your knees, how hairy you are… but don’t panic because both sexes are far more forgiving than you think.

As I said, everyone appreciates a good-looking body – but people are more attracted to faces and ultimately fall for the person inside. 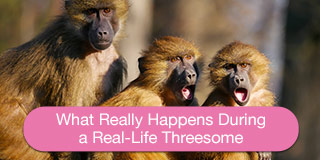