How to talk about sex How do I tell my lover what I want without offending them? This is one of the sex questions I’m asked the most. In the beginning, when you’re shagging yourselves silly, talking about sex is easy. In fact, most of us don’t shut up about it. It’s only when things go wrong that we clam up. Not so much fun talking about sex when you’re not up for it, not having it or hate doing it!

But here’s the deal: if you can’t talk about sex with your partner, you aren’t going to be having it long-term. Kid yourself all you want that the odd grunt, groan or moan is all you need to communicate lust. That the six-year sex rut you’re in will just fix itself with time. That your partner’s wandering eye has nothing to do with the fact you haven’t slept with them for a year. That her yoga class really does go till 10pm. That if you concentrate hard enough, he’ll finally work out where your clitoris is. Dream on.

Talking about sex doesn’t just fix these problems, it reassures us, deepens trust and makes us feel ‘normal’. It creates desire, titillates and – most importantly of all – stops us sliding into the perilously tedious, God-do-we-really-have-to sexual doldrums. With so many advantages, why don’t we do it?

Because if you choose the wrong words, the opposite can happen. You can just as easily upset, deflate and devastate your partner, destroying what little sex life you had left.

No wonder we’re all so nervous.

Now I’ve really got your attention, let’s look at how you can open the channels of communication – and inject some seriously spicy sex into your life.

First up, have the pre-chat:

Yes, you really must have a ‘We’re going to talk about sex all the time now’ conversation. Start by shaking on it to make it an official deal. Set ground rules: Agree not to judge each other. Agree not to get all huffy and sulky if one of you confesses the other’s signature swirly tongue, ‘It worked on a supermodel’ technique actually doesn’t do it for you. Set yourselves up for open, honest communication.

Know what you want

This sounds basic but lots of people don’t know. Be specific. You want more sex? How much more? What type of sex – intercourse, oral, handjobs? When do you want it? Where? For how long exactly? Which part of the sex session do you want to last the longest? Do you want more orgasms or sex more often or for sex to last longer? Really think things through before you talk.

Decide how much of your past you want to share

Some people are curious and amused hearing about the lesbian snogs you had in the back garden when you were 15 and how your last ex made weird grunting noises when he came. Others don’t want to know any details about any past lovers because all it does is set up a horrid, full-colour tape that whirls around and around in their head – and not in a good way.

Agree you can stop new things AT ANY TIME

One of my friends slept with another friend of mine and about two seconds after he’d penetrated, she said. ‘Stop, this isn’t working for me. Sorry’. Two minutes later she had her clothes on and was out the door. He was left sitting on the bed in shock.

Now that took guts. While this is an extreme example and I don’t suggest for a second you do the same (I’ve been consoling the guy ever since), it really is pointless pretending you’re enjoying something if you’re not.

Yes, it does take courage to say ‘You know what, this isn’t actually doing it for me,’ 15 minutes into the elaborate role-play you suggested and your partner spent weeks pulling together. But even if that Princess Leia outfit will hang, forlorn and unworn, in the back of your wardrobe, you’re still wise to speak up.

If you know you can say no after you’ve started, it will encourage you both to try stuff you’re pretty convinced you won’t like, but know puts a glint in your partner’s eye. Having said that, if your partner’s really getting into it and you’re so-so but not hating it, indulge them for a little while.

Obviously I’m not suggesting you launch into an intimate confession about the time you walked in on your sister and a cucumber, but in a long-term relationship it is necessary to share. If some guy forced you to give him oral sex at uni, that’ll explain why you’re not falling to your knees the second he waves his erect penis in the air.

People don’t mind you saying no if they understand why. It also means you’re not going to freak if they try something new spontaneously because they’ll have a good idea what’s out of bounds.

Tell and show each other your hot spots

Explore old favourite zones and discover new ones. Spend one session licking, stroking, biting, caressing (you get the picture) each other everywhere. Who’d have thought a tongue swishing between your toes would feel so good? We forget how much we like things until we’re reminded of them. Also remember, hot spots change over time (second by second, if we’re talking your average hormonal female!).

Say how hot they look, how good they are at certain things. Do it often. This is the one time you’ll never get in trouble for repeating yourself.

If your partner tentatively tries something, respond

We’re all a little bit shy, so if you notice she gives your bottom an experimental slap or he holds your hands together above your head, react for God’s sake! Either say a very obvious ‘Ummmm’ at the time or ‘Hey, what you did – that was hot’ afterward. There’s nothing worse than working up the courage to try something and then having no idea whatsoever if the person noticed, liked it or hated it!

How do experts get to be expert in their particular field? They research their subject – read books, pay attention to articles in papers, magazines, online, watch documentaries and movies. Do the same when it comes to sex.

For advice on how to ask him certain sex questions, see Part 2 of How to Talk About Sex, out next week. 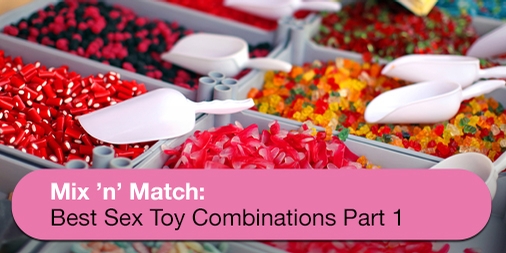