Well, no-one actually has vaginal orgasms! Orgasms are generated by the clitoris – which is, of course, why you are keen to introduce a vibe into bed with you. 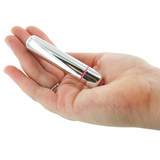 The best vibes for the job aren’t Rabbits, but things like vibrating penis rings, finger vibes (they make it easier to hold on the clitoris) or a slim little bullet vibe is also great: intense in vibration but non intrusive.