Cut vs uncut: what every woman needs to know

Cut vs uncut: what every woman needs to knowTracey5th April 201721st January 2021 If you’re a sexually active female you’re likely to encounter both circumcised and uncircumcised penises on your travels. Here’s the myth-busting low-down on what it means for both the penis owners and for you.

Circumcision – removing the foreskin of the penis shortly after birth – is performed for ‘hygienic’ or religious reasons.

Today, circumcision rates are falling globally but it’s still extremely common in the US and within certain religions.

While it can be said that circumcision does have certain health benefits like decreased risk of urinary tract infections, washing thoroughly beneath the foreskin achieves the same effect.

If you’re a sexually active female, the chances are that you’ll encounter both cut and uncut penises on your travels. So let’s challenge a few misconceptions right here and now.

This is a matter of personal taste and what you’re used to. Take a flip through some old photos and most of us will cringe at the ghastly get-ups we thought looked bloody marvellous ten years ago. The fact is, they did – at the time.

Fashions change and so does our perception of what looks good. If you’ve only slept with circumcised guys, an uncircumcised penis looks different and our natural reaction is to go ‘blah’.

If everyone you’ve slept with is uncircumcised and you hit a circumcised one, it will look funny to you as well.

Uncircumcised men don’t get as hard

Believe me, the blood pumps just as ferociously through an uncircumcised penis as it does a circumcised one. The reason it doesn’t feel as hard around the glans (head), is that the extra skin ‘cushions’ it slightly. Ever so slightly.

The uncircumcised guy does need to be scrupulous about his personal hygiene to avoid odour problems. But if he showers regularly and washes properly – gently pulling the foreskin back from the penis and washing underneath with mild soap – he’ll smell (and taste) just as sweet as the next guy.

A 2013 survey of 1000 men indicated uncircumcised men are more sensitive. This is probably because the head of his penis is covered by skin and therefore s not exposed to things like rubbing against clothing. But this doesn’t mean he’ll come more quickly: Inside the vagina, the sensation’s essentially the same and it’s what he’s used to. 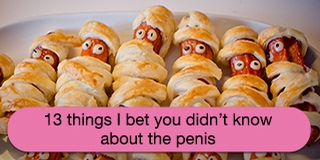